John Lennon's last live concert appearance, as a special guest of headliner Elton John at New York's Madison Square Garden in 1974 has long been one of the Holy Grails of lost rock footage.  Although the audio of Lennon's three song appearance ("I Saw Her Standing There", "Lucy in the Sky with Diamonds", and "Whatever Gets You Thru the Night) was professionally recorded and released, it has long been thought that no film footage would ever appear.  However, yesterday, a youtube user calling herself mommamaxx posted the first ever clip of Lennon's Thanksgiving Day, 1974, guest appearance with Elton John. Mommamaxx notes that she shot the five minutes of silent Super-8 film, standing on her seat, as an 18-year-old concertgoer .  Lennon first appears at the 3:40 mark.

This brief performance film is considered especially important by Lennon fans and experts alike because it is the only major solo Lennon appearance for which film has not been readily available to the public.  Rumors of the existence of professional and amateur footage have circulated for many years, but this is the first public appearance of Lennon's only post-1972 stage performance.  Elton John, at the height of his superstardom in 1974 had provided backing vocals on Lennon's single "Whatever Gets You Thru the Night" and  asked the normally stage-shy Lennon to join him on stage if the single  reached #1 on the Billboard charts.  Lennon kept his promise and this appearance was the result. 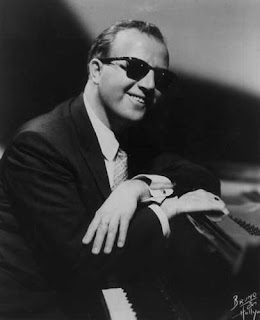 Sir George Shearing, the jazz pianist whose harmonically-complex style graced his own recordings and collaborations with Stephane Grappelli, Mel Torme, Nat “King” Cole, and many others died in today at 91.
Shearing, perhaps best known for composing the jazz standard “Lullaby of Birdland” also recorded the classic album Nat “King Cole Sings / George Shearing Plays in 1961 and a series of duet albums with Mel Torme in the 1980s. 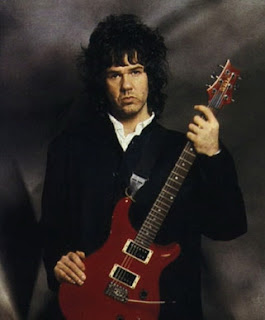 The BBC is reporting that former Thin Lizzy guitarist Gary Moore has died at 58.  Moore was born in Belfast and was best known for his 1970s with Thin Lizzy.  He was also a member of Dublin-based blues rock band Skid Row, BBM with Jack Bruce and Ginger Baker, and Colosseum II. 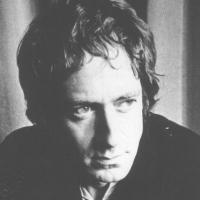 John Barry, composer and arranger of dozens of film and television scores, who was largely responsible for the signature sound of the James Bond films, died suddenly Sunday of a heart attack at age 77.

Barry's brass and electric-guitar sound shaped not only the sound of film from the 1960s on, but was a central influence in several genres: most notably trip-hop, but also electric soul, hip hop, and the lounge revival.  His soundtrack for On Her Majesty's Secret Service is frequently cited as the finest of the Bond scores, and conventional wisdom (if not copyright) usually credits him with the composition of "The James Bond Theme".  Among his many notable non-Bond scores are those for Midnight Cowboy, Dances with Wolves, Out of Africa, and Born Free.


Charlie Louvin,  who achieved fame as a country and gospel singer and songwriter, both as a solo act and as half of the Louvin Brothers (until brother Ira's death in 1965), died this morning of pancreatic cancer at the age of 83.   Louvin, shown in the above clip from The Ernest Tubb Show, was cited as a major influence by acts as diverse as George Jones, Elvis Costello, The Byrds, Gram Parsons, Wilco, and Bright Eyes.


The Tragical History of Eleanor Bloom at Capital Fringe this July

Tickets: $15 (with prior purchase of a $5 Fringe button)
Buy online at capfringe.org (on sale June 22)


Produced as part of the 2010 Capital Fringe Festival. 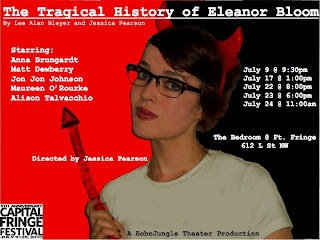 Perhaps only of interest to readers of this and similar blogs, and students/scholars of popular culture, the Scottish-born host of CBS's Late Late Show opened his Monday night broadcast with a lip-synched version of the Bonzo Dog Band's 1967 "Look Out, There's a Monster Coming".

The Bonzos, led by Neil Innes, were a British amalgam of music hall, rhythm and blues, jazz, and satire. Innes eventually collaborated with Monty Python's Flying Circus and was, with Python's Eric Idle, responsible for the Rutles.

Neil Young and Bert Jansch to Tour US

RollingStone.com recently announced that Neil Young will begin a solo acoustic theatre tour in the Southern US on May 26 in Louisville. Opening for Young will be legendary Scottish guitarist and songwriter Bert Jansch, a major influence on Young. Five dates have been announced (Lousville, KY; Atlanta, GA; Spartanburg, SC; and two shows at Nashville's Ryman Auditorium).

HRPM is hoping for dates in the Northeast US.

Web sources are reporting that Mark Linkous, of the indie band Sparklehorse, has committed suicide. Linkous was due to release a new album, a collaboration with Danger Mouse featuring an all-star cast including Iggy Pop and Suzanne Vega, and accompanied by a 150-page book of photos by David Lynch, but legal disputes with EMI have delayed the record indefinitely.

Linkous's music with Sparklehorse, including collaborations with PJ Harvey and Tom Waits has been described as "surrealist". Linkous, who had long suffered from depression and had a past of substance abuse, was 47.

It began as a simple enough idea.

Inspired by Harry Smith's monumental Anthology of American Folk Music, Ken Burns' Jazz, and the Norton Anthologies of British and American Literature, we got to wondering if, given the limitless availability of technology (and, especially, given the wonderful invention of mp3 playlists) if we could construct a canon that could be listened to - say, 1000 songs. Obviously, we could only trace recorded popular music in this way.
And, by "popular music" we mean "popular music we like and respect", that is, "popular music whose roots are in black music" - jazz, folk, country, soul, r&b, rockabilly, rock, and the genres closely related to them. "How," we asked, "Can we trace all of this music fairly in a playlist without having some artists be over-represented - do Duke Ellington, Louis Armstrong, Miles Davis, Bob Dylan, and the Beatles get to account for 800 of those 1000 songs?"
This is where it all got interesting. We decided that we would expand to 1200 songs (1200 was a nice round number and we couldn't bring it in at 1000) and that each artist, even Ellington, Armstrong, Dylan, the Beatles, Sinatra, Ray, Aretha, Tom Waits (well, you get the idea) would be represented by only one song, and that we would use context, organization (into 65 separate genre or era-based mixes), and our own ingenuity to tell the story of soulful popular music and semi-popular music.
It's a quirky list with some purposeful and some accidental omissions. It will be unfolded here over days and weeks and months, with videos to please the eye and some snark to tell the story. Please do join in the discussion.