Still Haven't Found What You're Looking For?


As the “wintry mix” spreads its way across the DC Metro area, I thought I would take the time to inaugurate a new blog feature: Music Chatter.  If you’re a regular reader (I know you’re out there), you’ll notice a new link (“Music Chatter”, funnily enough) on the home page (under the gramophone).  Music Chatter is the section of the blog to which I will be posting music-related musings that don’t conform to the blog’s existing structure: that is, things that I write about music that aren’t part of the larger “History”.
For this inaugural post, I’m going to steal a feature from Shakespeareteacher.com (a fine blog you should be reading).  On a semi-regular basis, Shakespeareteacher comments on the many and various search terms that bring readers to his blog, some serious, some thought-provoking, some that simply defy description.
The fine folks at google and blogspot allow me to see plenty of stats concerning who is reading this blog and how they got here.  This data tells me a great deal about all of you, especially those of you who find this blog through google searches.  It seems, perhaps not surprisingly, that the most common searches that bring people here involve the illegal downloading of music.  I can’t condone that behavior and you won’t find any downloads here, but I can condone some of the musical items people were searching for in the last month:
“bukka white the vintage recordings”
Nice choice.  There’s a very wide variety of early Bukka White out there these days, especially given the easy availability of European grey-market CDs.  My go-to disc for White’s acoustic blues is part of a, probably out-of-print, box set called Legends of Country Blues.  It’s especially useful if you want to find the lyrical sources for, roughly, 93% of the Led Zeppelin catalogue.
“bud shank windmills of your mind”
Bud Shank is about to make an actual appearance on the History (Volume 10), lending his flute to a Ravi Shankar track in one of the first instances of what would later, regretfully, be labeled “world music.”  I didn’t realize Shank covered “Windmills”, but the song (theme from the original, superior – Steve McQueen, not Pierce Brosnan, The Thomas Crown Affair), but he did spend a good deal of the late 60s recording quasi-lounge standards and soundtrack trifles; I’m sure I have some kicking around on vinyl.
Other searches for pirated music included Louis Armstrong (always a good choice) and Harry James (useful for students of popular culture and/or the trumpet).  Someone also seems to have been searching for sheet music for “Ahmad Jamal” and “Stolen Moments.”  Is there much trafficking in sheet music on the internets these days?  Can someone enlighten me?
The more interesting searches, though, are the ones that prompt questions or comments.  Someone searched for
“bachelor pad jazz”
Bachelor pad music (aka lounge aka space age bachelor pad music) isn’t often labeled as part of jazz, so perhaps my hope is being realized that it will be re-incorporated into the history of jazz (as a form of jazz that didn’t follow bop, but attempted to expand the precepts of swing).  Unlikely, though; I suspect it’s just someone falling through the never-ending retooling of genre names.  And probably looking for an illegal download rather than a critical essay, anyway.  It’s there, though, if you want it (see Volume 8). 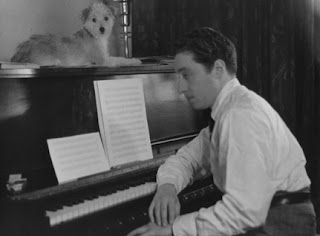 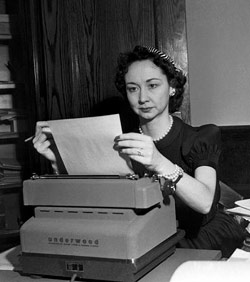 Dorothy Kilgallen makes an appearance, too, in the essay accompanying History Volume 8.  If you’re too tired to click over there, she’s one of those mid-twentieth century figures who fascinates me: a Hearst (read ‘conservative’) columnist who became a celebrity as a panelist on What’s My Line? She was also known for her investigative journalism and, among conspiracy theorists, as one of the many people who may have been eliminated by whoever killed JFK (she also may have just overdosed on booze and pills).  A quick perusal of Lee Israel’s Kilgallen bio reveals no connection to Harold Arlen (composer of “Over the Rainbow” and many other songs); five Arlen compositions appear on the History.  I’d suggest to the original visitor that the best place to find an Arlen-Kilgallen connection would be to peruse her Voice of Broadway columns in newspaper archives.  I suspect, though, that most Hearst-distributed newspapers have yet to be archived on google news; perhaps your local library or university library could provide the Kilgallen-Arlen connection. 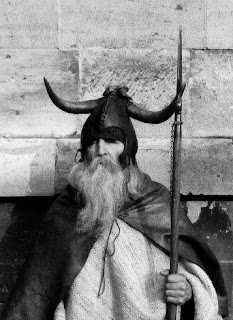 “viking inspired clothing”
Okay, this one’s my favorite.  The jazz eccentric Louis “Moondog” Hardin, who is a favorite around here for his complex, percussive pieces, frequently appeared, on streets, dressed in homemade Viking attire.  I assume the person who googled “Viking inspired clothing” wasn’t looking for links to Moondog.

“20 best rhymes in pop music history”
I’m not sure what would prompt someone to search for this particular phrase: school assignment, perhaps?  Maybe it was prompted by a specific article like those that appear in Pitchfork, Q, Mojo (“Top 100 Beatles Songs”, “Top 100 British Albums” etc.)  I’m also not sure what I would say are the 20 best rhymes in pop music history; the first ones I thought of are those that make me chuckle with their awfulness (“help” and “kelp” from Bob Dylan’s “Sara”, and the immortal rhyming of “masses” with, er, “masses” in Black Sabbath’s “War Pigs”.)  I invite, you, then, the history’s reader to submit your choices for best rhymes in pop music history.  If I get enough replies, I’ll post comments on the list, or let people vote on them, or somesuch; also feel free to offer  your tips for “Viking inspired clothing” in case that internet searcher ever comes back.

"Maybe Tuesday/ Will be my good news day."

"It's not that you're attractive/ It's just my heart grew active/ When you came into view."

"Who cares what banks fail in Yonkers?/ Long as you've got a kiss that conquers."

"Imagine all the lonely years you wasted/ Fishing for salmon/ Losing at backgammon/ What joys untasted!/ My night were sour/ Spent with Schopenhauer."

"You're sublime/ You're a turkey dinner/ You're the time of a Derby winner."

"You're an O'Neill drama/ You're Whistler's mama."

It began as a simple enough idea.

Inspired by Harry Smith's monumental Anthology of American Folk Music, Ken Burns' Jazz, and the Norton Anthologies of British and American Literature, we got to wondering if, given the limitless availability of technology (and, especially, given the wonderful invention of mp3 playlists) if we could construct a canon that could be listened to - say, 1000 songs. Obviously, we could only trace recorded popular music in this way.
And, by "popular music" we mean "popular music we like and respect", that is, "popular music whose roots are in black music" - jazz, folk, country, soul, r&b, rockabilly, rock, and the genres closely related to them. "How," we asked, "Can we trace all of this music fairly in a playlist without having some artists be over-represented - do Duke Ellington, Louis Armstrong, Miles Davis, Bob Dylan, and the Beatles get to account for 800 of those 1000 songs?"
This is where it all got interesting. We decided that we would expand to 1200 songs (1200 was a nice round number and we couldn't bring it in at 1000) and that each artist, even Ellington, Armstrong, Dylan, the Beatles, Sinatra, Ray, Aretha, Tom Waits (well, you get the idea) would be represented by only one song, and that we would use context, organization (into 65 separate genre or era-based mixes), and our own ingenuity to tell the story of soulful popular music and semi-popular music.
It's a quirky list with some purposeful and some accidental omissions. It will be unfolded here over days and weeks and months, with videos to please the eye and some snark to tell the story. Please do join in the discussion.